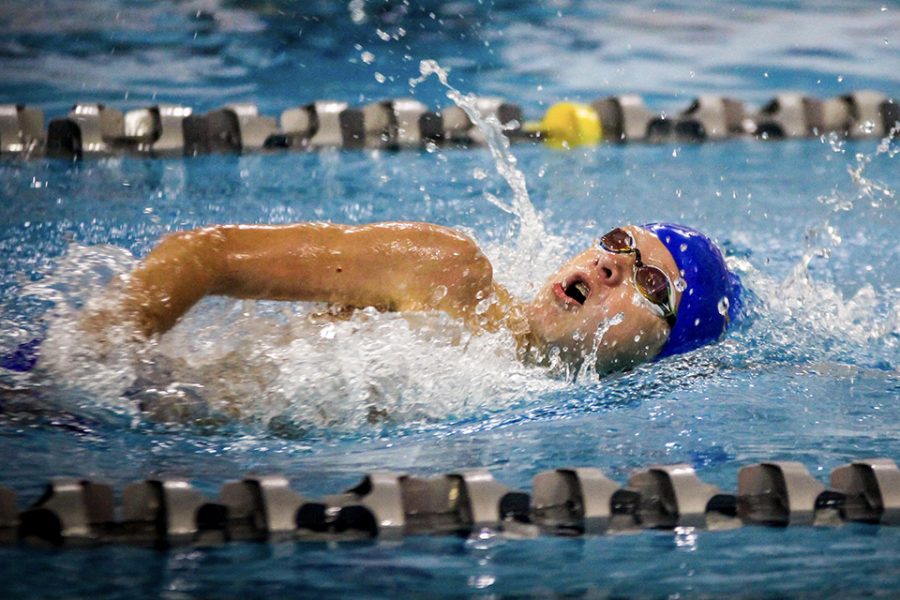 Swimming the 400 freestyle relay, freshman Will Cottle breathes during his race at the St. Peters Rec Plex, Oct. 5.

We had another great month of photo submissions! Below are the winners for October’s contest.

Judge’s Comments: Swimming can be a very challenging sport to photograph, but the photographer did an excellent job of capturing the swimmer at the right moment with the right exposure. The spray of water gives the picture momentum, and the swimmer’s facial expression gives it emotion. The caption, however, could use a quote or more information to offer more insight into the moment and what the subject was feeling.

Judge’s Comments: The angle and repetition in this picture, while not perfectly aligned, draws the eye in and makes it feel like the viewer is there. The subjects offer great facial expressions, and the photographer did a nice job of framing their focal point. The caption is also well-written.

Judge’s Comments: This picture is less about the subject and more about the atmosphere, which it fully captured. So while the screen might be blown out in the background, the fireworks are cleanly featured and the subjects well-composed to balance out the multiple focal points in this image. The caption does a good job of articulating the visual elements of the picture as well.

Judge’s Comments: Though the subject’s face is not clearly visible, her profile still shows emotion. The photographer was also able to capture the moment where the subject is simply suspended in air without support. The caption, however, could use a quote or more information to offer more insight into the moment and what the subject was feeling.

Judge’s Comments: While the framing is off in this image, it is the facial expressions that make it. The viewer might not know what is happening, but from the subjects’ facial expressions, it is clear that it was a big moment in the game. Many photographers only aim for action shots when photographing sports, but this is a good example that important moments can also be captured on the sidelines.